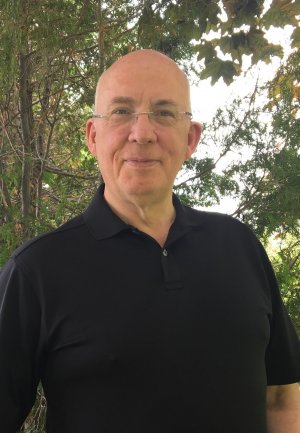 Bernard Quintal was born in 1956 in St-Quentin, New Brunswick. He moved many times in three provinces because of his father’s work. He obtained a medical degree at Ottawa University in 1979. Since 1981, Bernard has lived with his spouse Lucie in the Dalhousie region of New Brunswick beside the beautiful Bay of Chaleur.

Bernard started painting with watercolours in 1979. However, a busy medical practice curtailed his artistic endeavours for many years. Bernard is mainly a self-taught artist, but in 2015 he enrolled in several watercolour workshops. He also started oil painting classes. He now paints regularly. Since 2016 he has exhibited his new works in several group exhibitions. His goal is to have his first solo exhibition.

Bernard’s current interest is a close-up exploration of Maritime beaches, especially the colourful rocks and odd items found there, such as driftwood, shells and vegetation. In early 2019, he started painting a new collection of larger watercolour works about this subject. He has photographed maritime beaches with an imaginary magnifying glass. He has a need to preserve a memory of childhood pristine shores reliving the joy of discovery. However, Bernard is also preoccupied by the degradation of sea and river banks due to storms, flooding and rising sea levels. The increasing presence of plastics and other unwelcome trash is destroying the view and posing a threat to marine life. He hopes to encourage people to protect the long-term legacy of maritime sea and river banks.