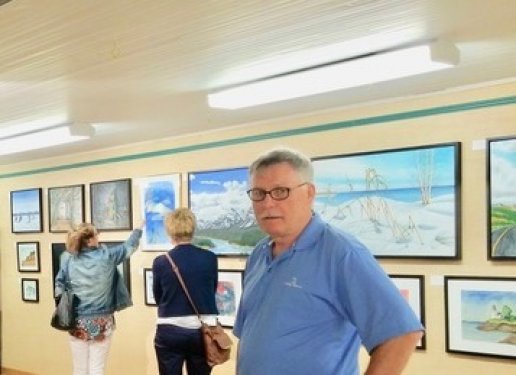 John has painted in oils, acrylics and watercolor for over 40 years.
Born and raised in Newfoundland, his working career in mining has taken him to various
parts of Canada. He has lived and worked in North West Territories, British Columbia,
Ontario, New Brunswick and Newfoundland.
He has lived in Bathurst for the past 12 years and since retiring for the mining industry
has focused mainly on his art.
He is mainly self-taught with his biggest influence being his late brother, Conrad Furey and the work of Early Impressionist painters. The majority of John’s work over the past 20 years has been executed in watercolor and acrylic.
John’s work has developed through the years with influence from the areas he has lived in
Canada. Some of these influences are the Inukshuk from the north, mountain scenes from the west and lighthouses from the east coast. These symbols were all prevalent in his recent Canada 150 exhibit held in Bathurst.
Painting what he sees through daily life experiences has become underlying component of
John’s work.