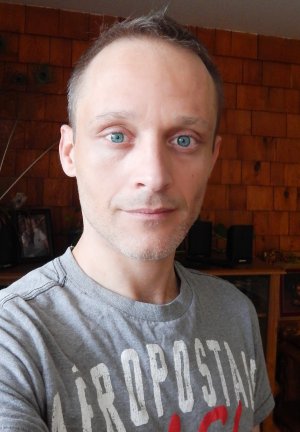 
Born in Grande-Vallée, in Gaspésie, he is the third in a family of four children. It’s at the age of four that his interest in art appeared. Throughout these studies, he stood out in this discipline.
From 1995 to 2000, he studied in General Art which allowed him to glimpse many facets of artistic expressions. He then pursued training in photography and also in master glazier(stained glass).
It is only in 2001 that his interest to paint really appeared, where he also will be doing his first solo exhibition. He will cross the road of the painter Claude Maillot, this meeting will have a real effect on the reflection of his artistic identity. For years he seeked to improve his techniques.
In 2006, he moved to Nouvelle, Qc, in the Bay of Chaleur where he build a reputation as a portraitist. In January 2009, a muse visited him on a early morning, where ultimate inspiration came to him. Without being able to explain it, his technique, his colors and his style appeared as if they had always been there.
From 2011 to 2017 he lived in Campbellton, New Brunswick and has been present in the art community, cumulating months of exhibitions until now. He will then return to Trois-Rivières for one year to broaden his horizons. Since October 2015, he lives from his Artwork.

Many of his artworks have found homes across Canada, Europe, London and Mexico ...