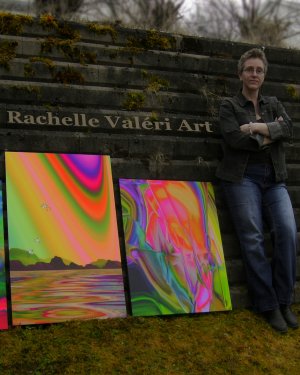 Born in Dalhousie, New Brunswick, Rachelle Valéri grew up in Paquetville (NB) and then studied at the Université de Moncton. She holds a Bachelor of Arts (Honours in French Studies), complemented by studies at the Department of Visual Arts. She now lives in Dalhousie since 2006.


Her first taste of digital painting in 2012 marked a turning point: Rachelle Valéri began her self-taught approach as a digital artist, and her artistic production became a full-time endeavour.


Her early digital abstract works were shown in 2013 at the Atlantic Visual Arts Festival in Caraquet, where she is the first artist to present digital paintings. The public was intrigued by the technique, and especially loved the series for its saturated, brilliant, and transparent colors, as well as for some surprising luminosity many believed a source of lighting was installed behind each painting. Most of these are now in private collections.


She presented her artwork in 2016 at the Bay of Chaleur Drawing & Painting Symposium in New Brunswick, and returns for the 2017 edition in Dalhousie.


Rachelle Valéri's current series further develops her playful and rhythmic universe, where pixels arise as organic cell units, forming networks sometimes reminiscent of micro-components of an electronic circuit. Between duality and fusion of organic and digital, from flowing curves to the contrasting rhythm of pixel squares, her works are described as composed of iridescent diaphanous fabrics, colorful blown glass, and the prismatic colors in soap bubbles and oil puddles on pavement.