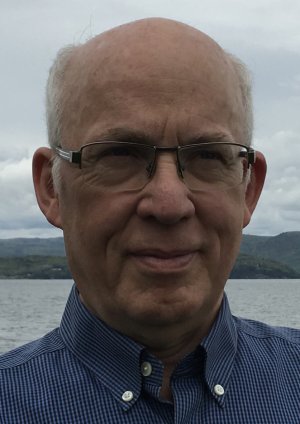 Bernard Quintal was born in 1956 in St-Quentin, New Brunswick. He moved many times in three provinces because of his father's work. He obtained a medical degree at Ottawa University in 1979. Since 1981, Bernard has lived with his spouse Lucie in the Dalhousie region of New Brunswick beside the beautiful Chaleur Bay.


Bernard started painting watercolours in 1979. However, a busy medical practice curtailed his artistic endeavours for many years. Bernard is mainly a self-taught artist, but in 2015 he enrolled in several watercolour workshops. He also started oil painting classes. He now paints regularly and in 2016 and 2017, exhibited his new works in group exhibitions.


Starting from realism, his more recent works lean towards abstractions of subjects that interest him. His painting mediums are watercolour, acrylic and oil. Multiple layering and mixing of colours are a constant in his works. Inspiration comes from his photographs, memories and feelings associated with his flower gardens, the forest, and waterscapes. His original abstract works are colourful, full of movement and character. His painting is a creative meditation with the goal of exploring new horizons.