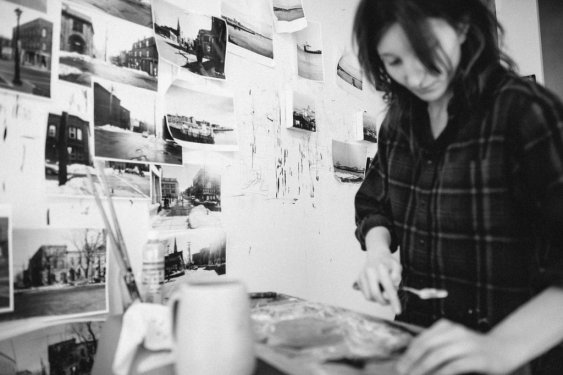 Currently based in Saint John, New Brunswick, Sarah obtained a Master's of Arts degree in Art History from Queen's University in 2009, and lectures at galleries and universities across Atlantic Canada. Her studio practice focuses on urban/industrial cultural and imagery. She has had solo exhibitions in New Brunswick, Nova Scotia and Ontario, and has participated in group exhibitions in France and elsewhere. Her academic research and studio work have received numerous citations and awards, including several prestigious Creation Grants from the New Brunswick Arts Board (ArtsNB).
Sarah exhibits work at her own gallery in Saint John, 73 Duke Street. She is also represented by Gallery 78, Fredericton, NB.
ARTIST STATEMENT
I engage with the transient elements of urban culture, like graffiti, construction sites, cranes, scaffolding and tankers – things that move in and out of the urban landscape. These moving elements reflect the changing and movable nature of urban identity itself. Architect Wes Wilson sees cities as “field[s] of accumulated meanings...[T]hey are undoubtedly an accretion of materials, of matter which is susceptible to processes of change.” (Wes Wilson, "Spitalfields Incognitae" in On Site No. 25, Spring 2011). I visually interpret this definition of urban space, (re-)creating a field of ‘accumulated meanings’ through the physical application of materials, built over time on the canvas, each layer a temporary interpretation of a landscape constantly in motion and flux.

I am intrigued by how inhabitants interact with built urban structures, exploring what it means, looks and feels like to be ‘on the grid’. We so often seek to physically escape the grid, where being ‘off’ the grid is traditionally seen as morally, spiritually and aesthetically better than being ‘on’ the grid. Working primarily with paint and some mixed media elements, my recent work presents a perspective of one living on this grid - collections of urban landscapes from the East Coast’s gritty port cities. I often present an abrupt viewpoint of the pedestrian city-dweller, off-kilter and sometimes harsh angles, diagonal compositions, confrontations with fire escapes, brick walls, alleys and looming cranes.