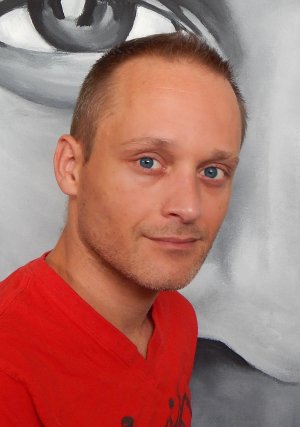 A native of Grande-Vallée, Gaspé Peninsula, Patrick is the third child in a family of four. From the age of four, he drew and recreated what he saw. At age six, he won his first drawing contest.

Throughout middle school and high school, he stood out through art.
In 1995, he studied general art in CEGEP Rivière-du-Loup, allowing him to grow many facets of artistic expression. In 1998, in Trois-Rivières, he pursued vocational training in photography and master glazier training.

In 2001, he began his interest in painting and started searching for his identity through acrylic. He held his first solo exhibition. Making his way slowly until 2006, he moved to the Baie-des-Chaleurs at Nouvelle.

He built a reputation as a portraitist and was met with high demand. In less than four months, he created more than a hundred of his portraits, all in black and white.

One morning in January 2010, he was awakened by the desire to paint in color. Without explanation, his technique, his colors, and his style came to him as if they had always been there.

Since then, he stands out more and more in arts, mounting monthly exhibitions. To this date, many of his artworks have found homes in Canada and a few in Europe.

Since 2015, he lives in Campbellton, New Brunswick.