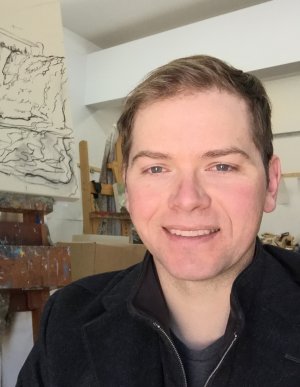 Reid's primary creative practice results mainly in large-scale oil-on-canvas pieces. Much of his work is derived from his innate connection to his environment. Early in life he developed a strong relationship with the outdoors while accompanying his father through the wilderness of Newfoundland. They spent a significant amount of time fishing and hunting together. Consequently this is also where much of his emotional growth happened, learning the ways of the world and the laws of nature.

These paintings come from several series Reid has worked on in the last number of years. The images begin as charcoal sketches on site but are more metaphorical than geographical or biographical. They are an experience of a time of day, a place in time, and are meant to be references to common human experience. He generally employs a more formal or academic approach to painting using colour, line etc., while mysteriously evoking an emotive sense of the image.

Dennis Reid graduated from Mount Allison University with a Bachelor of Fine Arts Degree in 1996. Since then he has received the Elizabeth Greenshields Award (2007) and an artsnb Creation Grant (2012). His work has been exhibited in New Brunswick, Nova Scotia and Ontario. It can be found in collections including the City of Moncton, the City of Saint John and the New Brunswick Arts Bank (2008 & 2011) as well as several private collections. Reid maintains a rigourous studio practice in Dorchester New Brunswick.