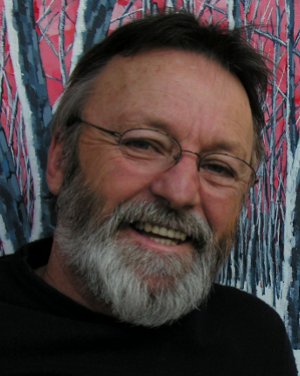 Rheal McIntyre is of Acadian origin and has lived on Miguasha Point in Nouvelle, Quebec, since 2011. Having held dear to his heart the indelible seaside impressions from his youth, he long ago was also captivated by the boreal forest that surrounds his native bay. These two elements, forest and sea, are the sources of his inspiration and of his well-being.

Rheal was born in Charlo, NB, and from age 8 was introduced to fine art by his brother Edgar, who was a student at l'Ecole des beaux-arts de Montreal. He also learned carpentry very young, starting his long history with wood in his father's shop at age twelve.

Always attracted by art, in the early 1990s he met young Montreal artist Sacha Barrette who gave Rheal intensive instruction in painting over a three-month period. This was an exalting time for this youth with the poet's soul who could not express himself by writing. Making up for lost time, he made 42 paintings in his first year. He then resumed sculpting and took drawing and painting courses in the Outaouais.

However, being primarily an autodidact and experimenter, over time he developed for himself the techniques that best express his view of the world.

From the beginning, he painted in marks, and broke colour rules. Realizing that his style was similar to impressionism and fauvism, this motivated him to resume the challenge of learning by reading - he wanted to understand the masters. Over the years, his studies, associations with other artists, work discipline, and participation in shows continued the evolution of his increasingly personal and distinctive style. From being a nostalgic painter of the Gaspe sea, he came under the spell of the exuberant chaos of the Outaouais forest and trees became the main characters in many of his paintings. He ranged from blue monochromes to sparkling colours, and his brush strokes gained precision. He learned how to transpose colours to evoke his emotions, and developed a disconcerting perspective to transmit both his reverence for and connection with his landscape subjects.

On returning to the Baie des Chaleurs, he chose a sparer style to represent the treed spaces of his modest home. The seashore enlivens him and since 2014 he has entered the world of fishermen with its immense expanses leading to distant horizons. He captures the moments when time stops.